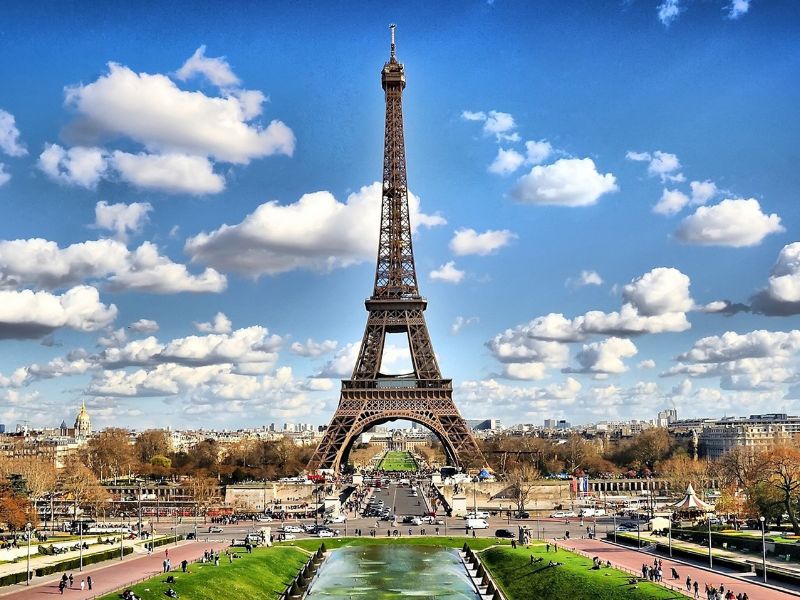 Paris is the capital and largest city of France. Located in the north of the country on the Seine River, it is known for its stunning architecture, world-class museums, and rich cultural history. Paris is often referred to as the “City of Love” or the “City of Light” and is one of the most popular tourist destinations in the world. Paris is home to several well-known landmarks, including the Eiffel Tower, the Louvre Museum, Notre Dame Cathedral, and the Basilica of Sacré-Cœur. The city is also known for its sophisticated cuisine and vibrant nightlife.

The Eiffel Tower, or Tour Eiffel in French, is an iconic landmark and one of Paris’s most popular tourist attractions. Located on the Champ de Mars in the 7th arrondissement of Paris, the tower was completed in 1889 as the entrance arch to the 1889 World’s Fair. It stands 324 meters (1,063 feet) tall and offers panoramic views of the city from its observation decks on the second and third levels.

There are several ways to visit the Eiffel Tower. You can purchase tickets online in advance or at the tower itself. A few different ticket options are available, including a standard ticket, a priority ticket, and a skip-the-line ticket. The standard ticket allows you to take the elevator or the stairs to the second level, while the priority ticket includes access to the first level and the elevator to the second level. The skip-the-line ticket allows you to bypass the regular queue and go directly to the security checkpoint.

In addition to visiting the observation decks, you can also dine at the Eiffel Tower’s two restaurants or enjoy a drink at its bar. The tower is open every day of the year, but its operating hours vary depending on the season. It is best to check the official website or call ahead to confirm the tower’s hours of operation on the day you plan to visit.

The Louvre is a museum located in Paris, France. It is located on the Right Bank of the Seine River and is one of the most famous museums in the world. The museum is home to a wide range of artwork, including paintings, sculptures, and other objects of cultural and historical importance. The Louvre is known for its collection of art from the Middle Ages, Renaissance, and modern periods, and it is particularly famous for its collection of French and Italian art. Some of the most well-known works in the museum’s collection include the Mona Lisa, the Winged Victory of Samothrace, and the Venus de Milo.

The Louvre is also home to a large number of ancient Egyptian artifacts, including the Code of Hammurabi and the Rosetta Stone. The museum is a popular tourist destination, and it attracts millions of visitors each year. The Louvre is a must-see destination for anyone visiting Paris. It is a unique and fascinating place to learn about the history and culture of different civilizations, and to see some of the world’s most famous works of art.

The Musée d’Orsay is housed in a former railway station, the Gare d’Orsay, which was built in 1900 to serve the Exposition Universelle (World’s Fair). The museum contains a collection of artworks from the period 1848 to 1914, including paintings, sculptures, furniture, and decorative arts. It is mainly known for its collection of Impressionist and Post-Impressionist paintings, including works by artists such as Monet, Renoir, Van Gogh, and Degas. The museum also has a collection of works by other artists, such as Manet, Cézanne, and Gauguin, as well as art from other periods and styles, such as Art Nouveau and Art Deco. The Musée d’Orsay is a popular tourist destination and is considered one of the most important museums in the world.

Notre Dame Cathedral is a famous cathedral located in Paris, France. It is a historic and architectural masterpiece, and it is one of the most visited tourist attractions in Paris. The cathedral is located on the Île de la Cité, an island in the Seine River, and it is considered one of the finest examples of French Gothic architecture. The cathedral was built in the 12th and 13th centuries, and it has undergone several renovations and restoration projects over the years.

Notre-Dame Cathedral is home to a number of important works of art, including stained glass windows, sculptures, and frescoes. It is also known for its impressive organ, which has over 8,000 pipes. The cathedral is a popular site for religious ceremonies, and it is also a popular venue for concerts and other events.

The Palais Garnier, also known as the Opéra National de Paris, is a famous opera house located in Paris, France. It was designed by the architect Charles Garnier and completed in 1875. The Palais Garnier is a masterpiece of the Second Empire style, a type of architecture that was popular in France during the 19th century. The building is characterized by its ornate and lavish decoration, with marble staircases, gilded moldings, and frescoes.

Inside, the Palais Garnier has a grand hall with a capacity of over 2,000 people, as well as smaller rooms and chambers for rehearsals and other performances. The opera house is home to the Paris Opera, one of the most renowned opera companies in the world. It has played host to many famous operas and ballets, including those by composers such as Verdi, Wagner, and Tchaikovsky. In addition to its cultural significance, the Palais Garnier is a popular tourist destination known for its beauty and grandeur.

Take a walk in the Tuileries Garden

The Tuileries Garden is a public garden located in Paris, France, between the Louvre Museum and the Place de la Concorde. The garden was originally created in the 16th century as a garden for the Tuileries Palace, which was the residence of the French kings. After the palace was burned down during the Paris Commune in 1871, the garden was opened to the public and became a popular destination for leisure and recreation.

The Tuileries Garden is a formal garden with symmetrical paths and geometric shapes, and it is divided into several sections, each with its own character and theme. The garden is home to a variety of plants, flowers, and trees, as well as fountains, statues, and other decorative elements. It is a popular place for Parisians and tourists to relax, take a stroll, or have a picnic. The garden is also home to the Jeu de Paume, a museum of contemporary art.

Take a walk on the Place Des Vosges In Le Marais

The Place des Vosges is a square located in the Marais district of Paris, France. It is one of the oldest squares in the city and is known for its beautiful and historic architecture. The square was built in the 17th century as a royal palace and was later turned into a public park. It is surrounded by arcades and covered walkways and is lined with houses built in the same architectural style. The houses are painted in various pastel colors and adorned with flower boxes and shutters. The Place des Vosges is a popular destination for tourists and locals alike. It is a peaceful and picturesque spot to take a walk and relax, and many interesting shops, cafes, and restaurants surround it. The square is also home to the Maison de Victor Hugo, a museum dedicated to the life and work of the French writer Victor Hugo, who lived in one of the houses on the square. The Place des Vosges is a beautiful and historic place to visit in the Marais district of Paris.

The Arc de Triomphe is a famous triumphal arch located in Paris, France, at the western end of the Champs-Élysées. Napoleon Bonaparte commissioned it in 1806 to commemorate his victories, and it was completed in 1836. The arch is 50 meters (164 feet) tall and 45 meters (148 feet) wide, and it is made of white stone. It is decorated with reliefs and sculptures depicting scenes from French history, and it is inscribed with the names of major battles and the generals who fought them.

The Arc de Triomphe is a popular tourist destination and one of Paris’s most iconic landmarks. It is also an important national symbol and has played a role in many significant events in French history. Visitors can climb to the top of the arch for a panoramic view of Paris, or simply admire it from below. The Arc de Triomphe is a must-see attraction for anyone visiting Paris.

The Pantheon is a famous monument located in Paris, France, on the left bank of the Seine. It was originally built as a church in the 18th century, but it was later turned into a mausoleum for French heroes. The Pantheon is an impressive and ornate building with a large, domed roof and a colonnaded facade. It is made of marble and stone and is decorated with sculptures and reliefs.

Inside, the Pantheon is a beautiful and grand space with a high, domed ceiling and large windows that let in natural light. It is home to the tombs of many notable figures in French history, including Voltaire, Rousseau, and Victor Hugo. The Pantheon also has a number of important artworks and decorations, including murals, frescoes, and sculptures.

Visitors to the Pantheon can admire its impressive architecture and learn about its history and the people who are buried there. It is a popular tourist destination and is considered a symbol of French culture and history. The Pantheon is definitely worth a visit for anyone interested in French history and culture.

Is traveling to Paris worth it?

Paris is a beautiful and culturally rich city that offers tourists various activities and attractions. Whether you are interested in art, history, fashion, food, or just soaking up the city’s unique atmosphere, Paris has something to offer. Some of the highlights of a visit to Paris might include seeing iconic landmarks such as the Eiffel Tower and Notre Dame Cathedral, world-class museums such as the Louvre and the Musée d’Orsay, trying delicious French food and wine, and strolling along the city’s charming streets and boulevards.

That being said, it is ultimately up to you to decide whether a trip to Paris is worth it based on your own interests and preferences. Paris is an excellent destination if you enjoy art, history, and cultural experiences. However, suppose you are not particularly interested in these things or have limited time and resources. In that case, you may want to consider visiting other destinations that better align with your interests.

Honorary mentions of the places in Paris

Your cart is currently empty.